“You bitch! You fucking lovely arrogant cunt! Shake it! Shake that fucking hot ass for me! Scream, whore, scream!”
I’m already screaming you horrible bastard! Make him stop! Anything to make him stop!
“Aaaauuuggghhhh! Aaaiiiiiiggghhhh! Mmaagghh iuugh sssfffoughfff! Peeeghffff!
“Pretty rape slut! You dirty cocksucker! Such a pretty rape slave! Good fuckmeat! Squeeze that sore butt hole for me! Try to push my dick out! Squeeze and suffer, bitch. Ahhhhhh, yes! So good, so good, so good!

Olivia was trembling as her body tried to shake off the effects of the assault she had endured. Lactic acids washed out of muscles that had been tensed up so long fighting against her bondage and the cock that had been thrust so cruelly up her ass. Adrenaline and endorphins also were washing out, and dull pain settled in where sharp had been.
The dildo buzzed away in her pussy, but she almost didn’t notice it now that he behind was not also so full.
Won’t he let me go? He has raped my vagina, my mouth, and my ass. What else can he do to me?
Will he ever let me go? Is he going to kill me?
Olivia’s anus burned in the cool cellar air. It has been stretched so wide and if felt as though it had been scraped raw. She could imagine it like it was glowing red in the darkness from all the abuse.
What did he mean, “a friend?” I’m not a lesbian.
The black surrounding her was total.
How long will he leave me here?
With all the other horrors he had inflicted on her, she had not even noticed until now how her hands were getting numb from the ropes around her wrists. She wiggled her fingers to stimulate the circulation. 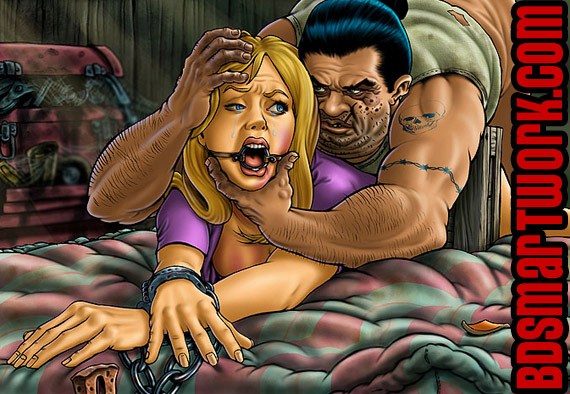 “I know you had a great time too… I felt you coming like a whore… You young bitches are pervs, you like it up your smelly shit-holes more than your greasy snatches. Yeah… I’ll bump you and I’ll pump you every day, all day… You’ll get to love it!”
GIRL THINKS: Maybe the twisted slob will have a heart attack. It’s my only hope…

What do you think of your Master’s love nest, slave? This is where you’ll cook, clean and do all sorts of house amenities like licking your Master’s ass-crack clean. But mostly you’ll be licking my dick and balls and having your holes soundly porked… It was a fucking pain in the ass having to walk to the bam every time I wanted to use your holes! 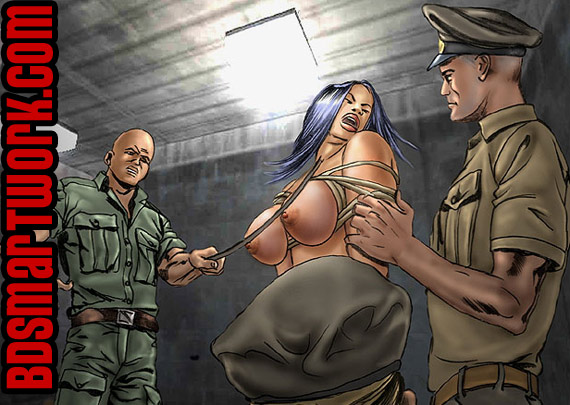 The soldiers tore the clothes from the body of the terrified girl exposing her beauty to all. “Wow! Look at the body on this slant-eyed whore.” They tied her tits and wrists tight enough to cut off circulation. Mei Ling began to beg for mercy but the words turned into screams of pain as the cane slapped across her firm, erect nipples. Her journey into pain had begun. As the program progressed the pain would test the very limits of her sanity. She was soon taken into Lab #1 where Doctor Freda Schecter waited. Mei ling saw the table, the straps, the generator, the wires with the alligator clips. She saw the chains and hooks hanging from the ceiling. But what terrified her most was the sadistic smile on the blond Doctor’s face. “Strap her to the table gentleman. It’s time to begin. This slut makes me specially horny…””

“Vanessa watched in horror as the torch spouted flame. The soldier smiled when he saw the look in her eyes. He held the flame up in front of her face. “Now we test your resistance to the flame torture my dear.” He slowly moved the flame toward one firm breast and centered the flame on the nipple. “AAAAUUUMMMPHM” Vanessa screamed around the gag as the delicate flesh began to singe. Another soldier pulled a beautiful brunette girl onto her hands and knees and rammed his cock into her ass. “That’s it comrade, burn the bitch! I love to hear them sing while I fuck!” He pulled her long black hair like the reigns on a horse. “Move your ass bitch, or you’ll trade places with your blond friend!”